A number of months ago I got an email from a guy named Miguel asking me about photographing his wedding. The first thing I always respond with is “Do you have a date picked out?” I am a busy photographer and I don’t need to waste their time if I am already booked. His response caught me off guard. “It’s the 4th and the 6th of July.” Thinking he was telling me about a rehearsal dinner and a wedding date I responded, so do you only need me for the 6th? No he needed me for both. The ceremony was going to take place on the beach in the morning of July 4th. The reception was going to be on the evening of the 6th. Miguel and his bride, Hope, are both active military. Apparently the 4th is the day they started dating years ago. Seems fitting to pick that day to get married.

It is no secret, I don’t like mornings. I am a night owl. As it is I am typing this blog post at 3am, that is how I operate. For this morning wedding Hope needed me to be at the Beachouse restaurant at 6:30 am. The room for her to get ready is was pretty small. Once you add it 4 bridesmaids, make up people and some more family there isn’t much room for me. The ceremony was to start at 8 am. We got pretty close to that but it started a few minutes late, that was okay, it gave guests time to beat the holiday traffic and make it to the beach. Now the headline is 72,000 guests. Well there was maybe 100 chairs and maybe 120 people with some strangers watching on the beach. How did we get to 72,000 guests then? Well the restaurant has a live stream weather camera for FOX 13 the Tampa news channel. That morning one of their meteorologist noticed the chairs being set out. He made a remark about it live on air and it gained some attention. FOX 13 then put a link to it on their facebook page and boom, next thing you know 72,000 people from all over the place were tuned into this wedding. It had no sound and they had no idea who was getting married, but they watched. During the ceremony we had NO idea that it was being watched by so many people. Thankfully I didn’t become a viral sensation for the wrong reasons. 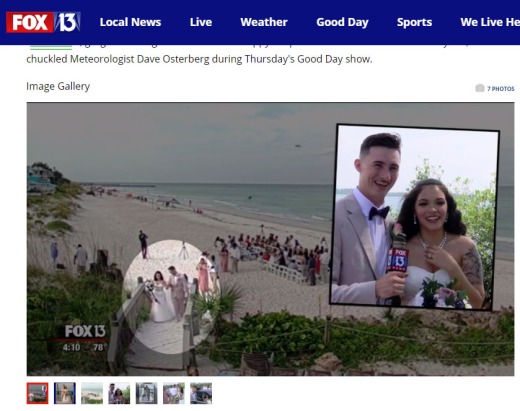 After the ceremony the bridal party took a boat over to Beercan Island, which isn’t really an island. I drove my car and we took bridal party pictures over there. It was BRUTALLY hot this day, If i remember the heat index was well over 100, I was happy to have a 36 hour break between the ceremony and the reception.

Two days later, this time with Nikki in tow, I went to Mote Marine in Sarasota for the reception. The layout was really beautiful. Mote did a great job along with Nellie who had some fantastic food. With the ceremony already taking place and me being able to get quite a few of the typical pictures out of the way on the 4th, the 6th left a lot of time for one on one with the bride and groom. Hope had a gorgeous dress and a veil, which always makes me and Nikki happy. There was this beautiful greenery area on the back of Mote which lent itself to some stunning imagery. These two did a great job and were really easy to work with. One of the close ups is one of Nikki’s favorites and I have to admit it is growing on me too.

Of course I have to tell you about the last shot of the night. I think Nikki and I really take pride it challenging ourselves and going for shots other photographers don’t go for, or can’t get. Nikki is hands down one of the best at posing people, I would put her up against anyone. Nikki spent years modeling for one of the worlds best wedding photographers back when she started this photography job. She had one of her actual wedding images used as a Kodak advertisement. She reminds me from time to time that I haven’t done that yet, lol. She keeps me in check. Anyways with her posing and my strong sense of lighting we set the bar pretty high for ourselves. At Mote there are a lot of tanks with some fun creatures swimming around. Right next to the repetition spot was two story tall shark tank. We decided to go for a shot that showed them and the sharks. There is really only one way to do this, you have to light the tank up. So we used three different lights in this image. One to light Miguel and hope. A small one behind them to separate them from the background and lastly, one downstairs behind the glass to light up the tank. Honestly my equipment surprised me. The way I trigger my lights is with a radio slave system. One of top of the camera (transmitter) and one on the lights (receiver). The light that was going to light up the tank was easily 35 feet away there was no direct line of sight to the slave except for through the tank. Amazingly it freaking worked, every time i pushed the button. Sadly the space we wanted to put Miguel and Hope was really limited when it came to the types of posing we could go with. We went with a pretty basic pose which I think worked out better anyways with such a drastic lighting set up. I lucked out and managed to get three sharks swimming in the frame plus a school of fish swimming in the bottom left corner of the tank and two sharks sleeping on the bottom. I would say it is a pretty awesome image to end the album with.

This entry was posted in Uncategorized. Bookmark the permalink.